When it comes to music streaming service, we want to make sure that it will meet our preference and it is worth subscribing to. One of the famous music stream services available in the market is Apple Music and Pandora. If you are having difficulty with which to avail between Apple Music vs Pandora, then this post might help you decided because we will be going to discuss here the detailed comparison between the two and their Pros and Cons. Are you ready to find out? Then let’s begin!

Part 1. An Overview of Apple Music and Pandora

Now let’s get a deeper comparison between Apple Music and Pandora. We will discuss here, each other’s user interface, how much each one costs, how is their music discovery and music catalog, of course, their audio quality, and also their compatibility. Let’s keep going. 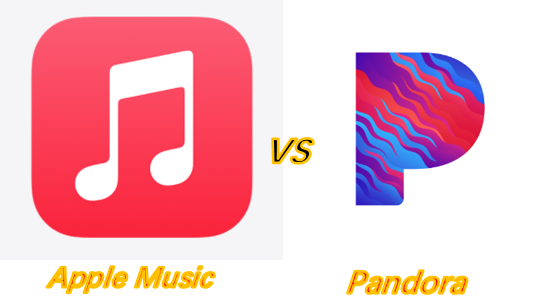 When it comes to the user interface, the Apple Music interface is designed with a simple layout showing its main features and they chose gray as the standout color of the app. It has upfront navigation that you will instantly notice on the middle-upper portion of your screen where you can choose your Library, For You which has carefully tailored recommendations of songs or albums from a different artist based on your recently played music or album, Browse where you can search for you preferred songs or artist and lastly, Radio.

On the other hand, Pandora gives you a simple with a purple vibe interface. By clicking the Now Playing tab, which is on the upper left portion of your screen, you will see the song that you are currently playing. It also shows additional information such as the album art, lyrics, bios, tour dates, etc. on the center of the screen and also the thumbs up and down button at the lower portion along with other navigation buttons. It is said that this improved Navigation feature makes it easier for users to search for their preferred tracks, controls for playback, and create as well as organize stations but some users find the desktop version’s IU more complicated.

Apple Music offers three subscription plans while Pandora has four kinds of service that you can choose from. Let us compare each plan that you can subscribe to.

So, what are the three subscription plans of Apple Music? These are individual which will costs you $9.98 every month, family sharing which you can share up to 6 members that cost $14.98 every month and student plan which costs $4.99 every month that you can avail for four years or 48 months and also, take note that you will be asked for proof when you avail the student plan.

Apple Music also offers a three-month trial period for a first-time user to try the full features of the app. You can also cancel at any time before the subscription ends if you are not satisfied with it.

Now, as to Pandora, its four kinds of services are Free ad-supported pandora which is a radio ad-supported service that allows users to create or make stations of their preferred songs, artist, and genres, Pandora Plus which costs $4.99 per month or $54.89 per year that can allow users to listen to 4 radio stations while offline, replay preferred tracks and an advantage to enjoy a longer timeout period with a higher quality of audio, Pandora Premium which cost $9.99 per month or $109.89 a year that includes all the benefits of Pandora Plus though much longer timeouts and much higher quality of audio, moreover it also allows users to fully create or customize a playlist, search for songs and access their playlist more often even offline as compared with Pandora Plus, and lastly Pandora Family Plan which has the features of Pandora Premium the only difference is you can share this up to six accounts, this subscription plan costs $14.99 every month or $ 164.89 every year.

When it comes to music discovery and music catalog, Apple Music offers over 60 million of music or tracks from its catalog. One feature of Apple Music is that you can integrate those songs that you purchased or already collected from your iTunes and get it ready to stream or available on your Apple Music Library. As compared with Pandora, it offers over 40 million songs and also carefully chosen songs and automatically generated radio stations which offer a different theme.

If you have difficulty which of the two you will avail, consider the one which will be going to meet your music preference like if you are fond of international singers then Apple Music would be the best choice for you.

Now let’s compare the audio quality offered by both music streaming services. Apple Music streamed in AAC at 256kps while Pandora offers only 192Kbps in AAC format even among its Premium subscribers. It may also consider as the lowest audio quality among main streaming services. Perhaps if you are a musician or a professional artist, the streaming quality of Pandora might not meet your expectation or standard for commercial use or high-quality streaming experience.

When it comes to compatibility, Apple Music as we all know will work on any Apple devices such as iPad, iPhone, Apple TV, Mac, Apple Watch, and HomePod. Apple also makes it available for some smart speakers such as Google Home, Amazon Echos, Sonos devices, or on cars using Bluetooth connection. Pandora Premium which was only available on few platforms before is now accessible on Android, iOS, desktop, Sonos, Kindle devices, web browser, Amazon Fire TV, Google Chromecast, even on Xbox One, FitBit, Google Home, etc.

Already decided which is a music streaming service suit you? If still not then this section might help you decided. Here, I will separately discuss the Pros and Cons of Apple Music vs Pandora.

PROS and CONS of Apple Music

Same with iTunes, Apple Music has a clean design that contains playback controls that is visible on the upper left of the screen and search on the opposite side. You can also minimize or can be a mini-player it so it will not take so much space.

You can easily access your iTunes library using other devices because it instantly synchronizes your playback information and subscriptions as well as your purchases.

Apple Music offers a wide range of selections of music, videos, and podcasts as compared with other music streaming services.

It allows you to play music using more than one device at the same time using Airplay within the range of Wi-Fi.

With the use of its parental controls, it can restrict or deny accessing some parts in Apple Music or iTunes like shared libraries, podcasts, stores, or internet radio which are not suitable or warnings.

Even though Apple Music has a three-month free trial in which you can access its full features, it is still considered as a subscription streaming service only. They don’t offer a free ad-supported version.

It can consume a larger space with every update.

There are times that you think your album or tracks seems not complete or something is missing, the reason for this is because of copyright issues and we know that Apple Music is sensitive to this.

Apple Music offers a wide range of selections of music, videos, and podcasts as compared with other music streaming services.

It allows you to play music using more than one device at the same time using Airplay within the range of Wi-Fi.

With the use of its parental controls, it can restrict or deny accessing some parts in Apple Music or iTunes like shared libraries, podcasts, stores, or internet radio which are not suitable or warnings.

PROS AND CONS of Pandora

As Pandora is very famous when it comes to accurate recommendations, this also makes you feel the utmost personal radio streaming experience. Pandora also displays specific reasons why each song is being played according to your inputs.

Pandora can tailor the songs or genre that you prefer since it has this thumbs-up and thumbs-down rating. It will adjust accurately as time passed by according to your preference.

Pandora allows users to create a station since it has huge library tracks, moreover, it also allows you to mix and match an unlimited number of input criteria.

Since Pandora has an application available on major platforms such as Android, iOS, and WP7, it is accessible. Moreover, it is available on some vehicles in which you can also use voice commands.

It offers a free service which you can try like the ad-supported Pandora.

Pandora has this music genome project which can accurately point out the songs that you like, it is also can be compared to your DJ.

Unfortunately, if you are outside the US and you have a premium plan, you can’t access its service since it is not available other than in the US.

Users are only allowed to skip 6 times within an hour per station and only total of 72 skips a day which makes it hard for users especially if you want to choose specific music.

It is said that Pandora Radio only has a 128kbps bitrate for the commonly played song while the paid service offers 192kbps bitrate.

Since Pandora offers a free ad-supported service. It is expected that you will hear advertisements more frequently but you can avoid this once you avail of premium service or if you have software that can block advertisements.

Because Pandora has only 1 million songs available on the service, then it also means that the range of artists is limited. 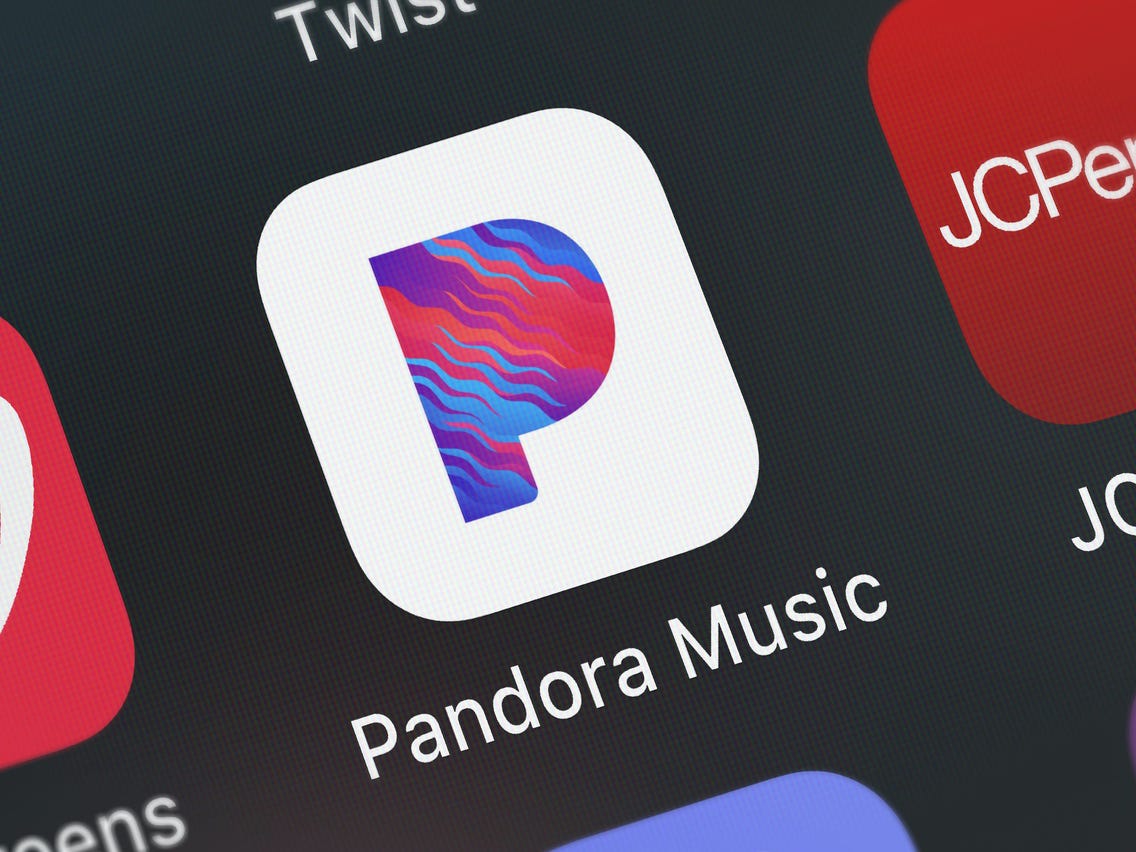 There are other PROS and CONS too between Apple Music vs Pandora but what I mentioned above are the highlights on both music streaming services.

Part 4. How to Listen to Apple Music without Subscription?

Ever wonder if you can listen to Apple Music without a subscription then the answer is yes! You want to know how? all you need is a professional tool which is the AMusicSoft Apple Music converter for you to make it possible. So, what does this software do? 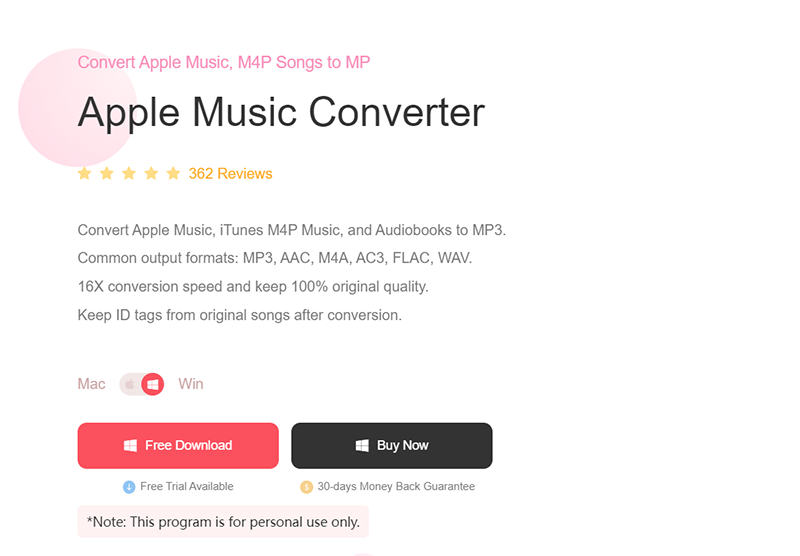 AMusicSoft Apple Music Converter removes the DRM encrypted on Apple Music once the song is converted, by removing this, the songs are no longer restricted and you can freely access it without limitation even after you are out of subscription and able to listen at any time. Furthermore, you can also use the converted songs on any device because it is DRM free and its format can be set to any format that is compatible with other devices like MP3.

So, after discussing many aspects and differences between Apple Music vs Pandora, from its user interface, cost, audio quality down to the pros and cons of each music streaming service. I can say that Apple Music has an edge on handling and organizing albums, songs, playlists, etc. much accurately. Plus, if you are fond of collecting Apple products such as the Apple Watch or HomePod, then using Apple Music can make your streaming music more amazing since it is very much compatible with these products.

As for discovering new music and you want suggestions then Pandora will surely give you a better recommendation because of its “Music Genome Project”.